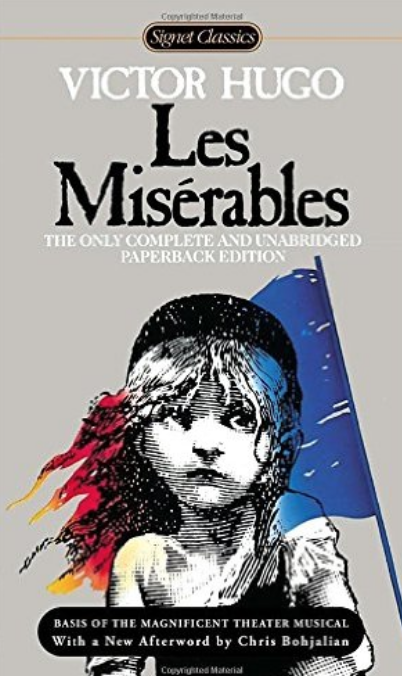 I enjoy a good read and an understanding of a good review is often helpful as well… We would like to do this once a week.

“How wonderful it is to be loved, but how much greater to love! The heart becomes heroic through passion; it rejects everything that is not pure and arms itself with nothing that is not noble and great. An unworthy thought can no more take root in it than a nettle on a glacier. The lofty and serene spirit, immune from all base passion and emotion prevailing over the clowds and shadows of this world, the follies, lies, hatreds, vanities and miseries, dwells in the azure of the sky and feels the deep and subterranean shifts of destiny no more than the mountain peak feels the earthquake.”

While reading these lines, I knew how I was going to start my review once I finished the book, and that I was going to highly recommend it to anyone who would care to listen.

Les Miserables definitely counts as one of my favourite books, and is, perhaps, one of the best works in all of literature. No wonder Ayn Rand admired Victor Hugo.

Be prepared, hence, for a really long review.The genius and master story teller that Hugo is, the 1201 pages(rest were relegated to the appendix by the translator) made for swift reading (except for the account of the battle of Waterloo, ‘a few pages of history’ and French sewer system, all of which I completely skipped). The numerous twists and turns, the re-emergence of characters I considered irrelevant, at the most unexpected of places to take the story in a completely new direction made it thoroughly captivating, save a few places where perhaps Hugo fought with his editor and made it a point to see to it that whatever he had penned would find place in the final work, for instance, the 3 examples mentioned above that tried my patience in the very first few pages and which, I guiltless skipped. The eloquent prose and lofty thoughts all made good work of transporting me to a different world and inspiring in me the reverie that makes a person write poetry. Trust me, as your eyes grace the pages, all your finer sensibilities will be awakened and you will be intoxicated with idealism and beauty. As Howard Roark had said, “To the glory of man.” That’s what this book is about- a tale of heroism. Or, as Hugo himself put it, “This book is a drama in which the leading character is the infinite.”

Jean Valjean, the protagonist and his saviour Monseigneur Bienvenu will make you want to be a better person. First on the latter. Sample this: “Do not ask the name of the person who seeks a bed for the night. He who is reluctant to give his name is the one who most needs shelter… We must never fear robbers or murderers. They are dangers from outside, small dangers. It is ourselves we have to fear. Prejudice is the real robber and vice the real murderer.” I could go on to talk about his “sublime absurdities of goodness” and how “peaceful in his solitude, adoring, matching the tranquility of the heavens with the tranquility of his own heartbeat, ravished in the shadows by the visible and invisible splendurs of God, he opened his spirit to the thoughts coming from the unknown” and how in all of it he “did not scrutinise God but let his eyes be dazzled” but what touched me the most, in addition to his encounter with Jean Valjean, was his delicacy: “Is there not true evangelism in the delicacy which refrains frompreaching and moralizing? To avoid probing an open wound, is not that the truest sympathy?”. OK, now on one of the most poignant parts of the story- the episode where Jean Valjean, an ex-convict, finds shelter, food and more importantly, humane treatment, in the bishop’s place and has his soul taken from the devil and bought for God by the bishop. “Like an owl overtaken by a sudden sunrise, he was blinded by the radiance of virtue.” Yes, dear reader, I have Les Miserables open by my side and this review is going to have lots of quotes straight from the book (I’m not past 200 pages yet!).

I had forebodings of what would happen to Fantine but thought Hugo extremely cruel to have her die the way she did. Her feelings for her daughter, which Hugo describes along with his observations on the miracles that children are, are sublime. And the ‘tempest in the skull’ of Monsieur Madeleine and what he finally does in answer to his conscience is extremely moving. Particularly poignant was the Monsieur Madelene observing in the court room that in the earlier instance “he had been tried in the absence of God.” Same for the part about Fantine’s grave- “Mercifully, God knows where to look for our souls.”

Part 1 took me the longest and having come to book 2 of part 2, I was gradually being aware that I had in my hands a book I was sure to fall in love with. I was impressed, but not much, by then. My opinion changed pretty soon. Jean Valejean’s encounter with Cosette and their journey into happiness as a father and daughter thrown together by providence is laced with such tender prose as one can hardly help being touched. Take this one: “To stand at her bedside watching while she slept was to experience a shiver of ecstasy. He discovered a mother’s agonised tenderness without knowing what it was, for nothing is deeper and sweeter than the overwhelming impulse of a heart moved suddenly to love- a saddened, aging heart made new!..Nothing is more charming than the glow of happiness amid squalor. There is a rose tinted attic in all our lives.” These lines beautifully summarise what these 2 souls were to each other: ” He protected her and she sustained him. Thanks to him she could go forward into life, and thanks to her he could continue virtuous. He was the child’s support and she his mainstay. Sublime, unfathomable marvel of the balance of destiny!”

Javert pursuing Jean Valejean and the fantastic entry into the convent, both the first and the second time are terrific. Javert’s character throughout and his death also make for terrific reading. And more interesting is the hand of providence that made sure it was the same covent old Fauchelevent had been working in, who “having the chance to perform a good deed, clutched at it with the eagerness of a dying man offered some rare vintage which he has never previously tasted.” Also interesting is the character of the new grave digger: “In the morning I write love-letters and in the afternoon I dig graves. Such is life.” Hugo was a genius, I repeat.

Part 3 turned out to be more enchanting than the previous 2 parts. Marius’ discovery of his father, polishing of his character in poverty, and subsequently love for Cosette, all were philosophy and poetry-in-prose at their best. I could quote many but exercising the faculty of choice scares me. Some of the most touching and profoundly moving lines, lines dripping with beauty and eloquence have been lent to describe the love Marius and Cosette shared and if I start quoting, the 13,400 characters left for this review in Goodreads would be over without my having proceeded to the next part. Only this should suffice to say that the confessions of Marius and Cosette make for one of the most tender ways love is announced in literature. I’ll not forget, for a long, long time to come, what all preceded this one: “And gradually they began to speak. Outpouring followed the silence which is fulfilment.”

Gabroche’s was another unforgettable character and the night he spent with his two younger brothers without knowing their identity, caring and protective, and fun all the same, was endearing. The revolution didn’t surprisingly douse the passion I had developed for the book by then, eventually reading part 3 onwards till the last in 2 sittings flat. Marius’ conversation with his grandfather after 5 years was food for thought for the psychology student in me and the separation that followed, for both, was heart rending. From then on, I daresay, a different level is reached as the build up was such that I couldn’t just put the book down. Marius’ recovery, his grandfather’s ecstasy… the tale seemed to be moving towards a happy ending. The sight of the old man praying for the first time in his life was moving again. But the confessions of that another old man and Cosette’s growing indifference put me on guard for a tragic ending. Perhaps Marius would learn of this another father’s good deeds only after death had already done them apart. This thought shook me and I’m glad it didn’t happen so. Jean Valjean’s redemption and Marius recognising the true worth of the old man, however, were too much as the lump in my throat threatened to burst out and the tears welling up in my eyes took a life of their own and just wouldn’t stop. Again, I can’t possibly quote from those parts as there are simply too many. Thank God, it was a happy ending. That’s all I could think of as tears streamed down my cheeks while my eyes caressed the last 4 lines:

He sleeps. Although so much he was denied,

He lived; and when his dear love left him, died.

it happened of itself in the calm way

That in the evening night-time follows day.

I don’t know why… but books such as these make me fall in love with God, all the more…

Your can find the book here: Les Miserables – Book

You can find the movie here: Les Miserables – Movie